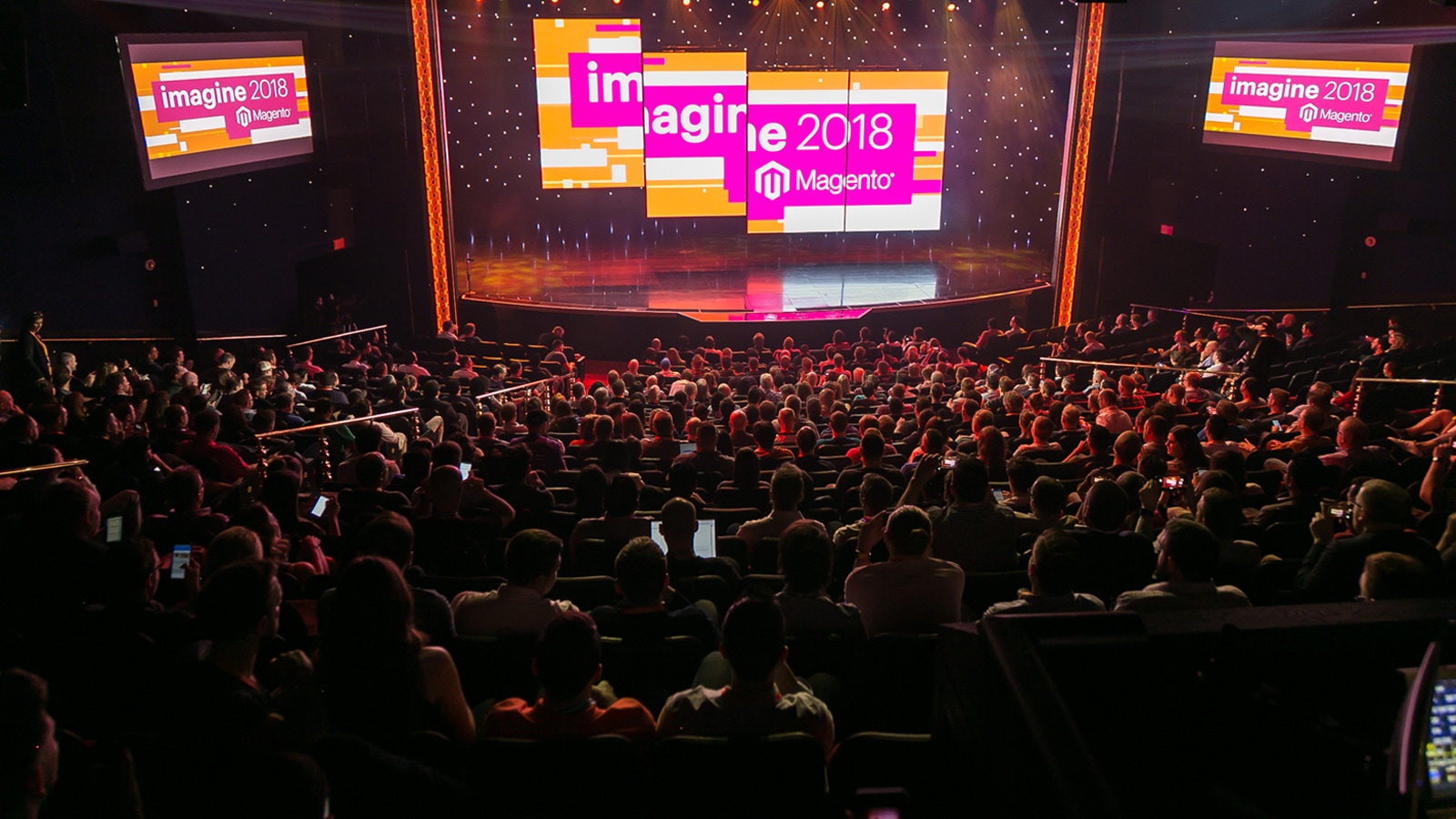 Magento Imagine is the most important eCommerce event, not only because it is an event organized by Magento Inc itself, but also because it is the best opportunity to meet all the companies in the market worldwide. The number of attendees, according to the organization, was 3000 people from more than 50 countries.

The event, like the previous editions, took place at the Wynn hotel in Las Vegas (NV) in the United States and lasted 4 days, 1 day for the Magento Partner Summit and another 3 for the main event, from the April 22th to 25th.

This year the representation of Interactiv4 in the event increased a little bit with the incorporation of Enrique Barreira and myself (Marc Rodríguez), to the assistants of previous editions, Ignacio Riesco, Juan Alcántara, Óscar Recio and Adrián Martínez.

The chosen day to embark on the trip to the new continent was Saturday, April 21th. We wanted to arrive a couple of days before the event to be well rested after the almost 14 hours of flight, scales included.

After stopping in Chicago we arrived in Las Vegas on April 21th about 7 pm. We must recognize that the image of the city was impressive, a show of lights and color destined to the entertainment of adults. We could continue counting our impressions about Las Vegas but for that we would need another post.

On April 22th, the Magento Partner Summit took place, which our teammates Ignacio Riesco, Juan Alcántara and Enrique Barreira had the pleasure to attend to. On this day there was a meeting with all the Magento partners, which could only be accessed by invitation, and different topics were discussed.

The most noteworthy of this meeting was that Interactiv4 received the Community Engineer Award, in recognition of our work in the community contributing and improving the source code of Magento. This award was a surprise and a source of pride for our company since it was given to us for all the work done among all the I4 colleagues last year 2017 with all our contributions and improvements to the github repository of Magento2.

So you can see that it was a surprise for us, I show you a picture of our colleagues collecting the prize in shorts, an issue that was widely commented at the event.

On April 23th Imagine 2018 began, through the corridors you could see people of different nationalities sharing the same nervousness and excitement for the start of the most important event of Magento worldwide.

First of all we could enjoy a breakfast in the hallways of the event, after collecting our accreditation and the different gifts offered by the organization, where we met many of our friends and acquaintances of the Magento community.

After catching up with everyone we were meeting, it was time to separate, with such a number of papers it was impossible to stay together.

On this first day of the event we were able to attend talks from the different patterns of the correct migration from Magento 1 to Magento 2, the benefits of multichannel and why it is the best growth path for Retailers. We also hear the story of Alessandro Ronchi about how he began to contribute to the Magento core by committing himself to the MSI Project promoted by the Magento Community Engineering Team.

The most important information we had was the one we received from  James Zetlen, Magento’s Frontend Architect, who told us about the future of the Magento 2 Frontend with the inclusion of PWA Studio. In this talk we could see a series of brushstrokes of what technology will be used and what features will be included, so we are waiting for the release of PWA Studio.

Once the talks ended and we were able to take a break, it was time to go to the main theater of Encore to attend the opening Keynote of the event. The Keynote was taught by the Magento CEO, Mark Lavelle, and in it we could see what the dynamic of the event was going to be and they presented us with the brand that accompanied us throughout the week “Lead the Charge”. With this phrase Magento wants to mobilize the whole community to make us feel an important part of the change and that we venture to be part of all the changes that are to come.

At the end of the Keynote we moved to the terrace of XS, a nightclub located in the Wynn, where we spent a few hours networking while enjoying well-deserved beers. Here we were able to discuss with our Magento figures our impressions on the status of Magento 2 and if it is worth noting something, it is the great number of congratulations received due to the prize received the previous day.

On Tuesday, April 24th, the event began with great pride for our company as our colleague Óscar Recio attended a private breakfast for all Magento Masters in 2018.

In that breakfast they received some guidelines of what it means to be a Magento Master and the repercussion that it has for the community. It should be noted that Óscar is the first Magento Master in Spain, so as you can imagine from Interactiv4 we are very happy to have someone in the company with such an important role.

When Óscar finished his breakfast, we all met on our way to the first Keynote of the day when Magento presented a statuette to our brand new Magento Master. The day started strong for Interactiv4.

Once the different talks began, we were able to get to know the experience by integrating Magento with ERP Systems in the hands of Sam Bayer, what will be the novelties integrated in the Magento 2.3 version in Olga Kopylova talk, the great advances in editing of content in Magento 2 through Page Builder or how to increase the revenue of our stores with a proper implementation of marketing and SEO techniques.

Among the different presentations that took place during the third day three adventurers decided to take the certification exam “Magento 2 Certified Professional Developer”. Our colleague Adrián Martínez managed to pass the exam with an impressive note considering the complexity of the exam, so we took this opportunity to congratulate him on bringing the first Magento 2 certification to the company. As you will have deduced the other two we had to postpone our certification for September hehe

After the talks and before the end of the day we went back to the Encore theater to attend the Keynote at the end of the 3 day. In this keynote, given by Mark Lavelle, awards were given to different Magento companies to recognize the effort made in different areas and, to our surprise, Interactiv4 received an award for “Best Global Expansion” for the Dufry project

As you can imagine, between the award received on the first day and those received along this, we returned to our hotel quite overwhelmed and especially very nervous about the party that was to come … Lengendary Imagine Evening Event!

Once we had put on our best clothes and kept the prizes safely, everyone knows that when they go out to party in Las Vegas … everything can happen, we head back to the Encore Beach Club.

Day 4: Closure of the event

Last day of the event … How has it happened so fast? It has only been 4 days, but that 4 more intense days!

We have to admit that it took us a while to get to the event this day, but we went with the same enthusiasm that took hold of us the previous days and the effort was rewarded.

The two most important things that happened this day and that are reason for Interactiv4 be proud again, were the award received for being in the Top 5 of Contributors to Magento and that Ignacio Riesco was named leader for the creation of the new Magento Association, well deserved appointment for all the effort and the implication of Ignacio in the different Magento events and for being an influential personality in this world.

After all the presentations, the conversations with the different attendees to the event, the different novelties, the awards received and above all the effort made by the company throughout the year, I tell you something, when you make projects with love , you work in a team, you get involved and you feel Magento in your veins you can get what you want. So if you are reading this article I want you to stop for a moment and think that maybe you or your company could be next year in Imagine 2019 having the same impact or more than Interactiv4 has had in this edition.

Gonzalo is a Magento Backend developer, even though he likes the “darkest” part of frontend development. He’s been programming for more than 15 years in nearly every field imaginable: from ecommerce, to apps, or newspapers. He’s nerdy, bald, and loves reading.